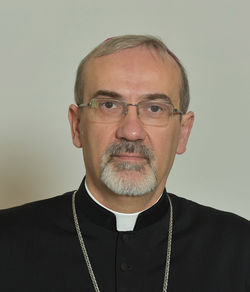 His Excellency Archbishop Pierbattista Pizzaballa entered the Franciscan Order in 1984. In 1990, he was ordained Priest and transferred to the Holy Land, where he entered the service of the Custody of the Holy Land. He was Vicar of the Latin Patriarch of Jerusalem for the pastoral care of Hebrew-speaking Catholics in Israel. He has translated various liturgical texts in Hebrew for the Catholic Communities in Israel.

He served as Custos of the Holy Land from 2004 to 2016. He is a member of the Congregation for Oriental Churches and has been a Consultor in the Commission for Relations with Judaism for the Pontifical Council for the Promotion of Unity among Christians. 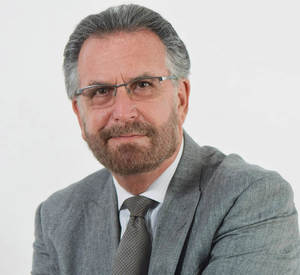 He is an International President of the World Conference of Religion for Peace (WCRP), and a member of the Board of Directors of the King Abdullah International Center for Interreligious and Intercultural Dialogue, established by the King of Saudi Arabia as well as the governments of Austria and Spain together with the Holy See. He is also Honorary President of the International Council of Christians and Jews (ICCJ); on the executive of the World Council of Religious Leaders and the Elijah Interfaith Institute’s Board of World Religious Leaders.

Transportation will be provided from Shivtei Israel St. to the west of the Notre Dame Center (opposite New Gate of the Old City). The bus will leave at 6:30 p.m and return at 9:00 p.m. The shuttle will only be ordered if five people sign up by noon Monday, Nov. 12th via tantur@tantur.org

Tuesdays at Tantur is a weekly event that seeks to establish a place for conversation. Co-hosted by the Tantur Ecumenical Institute and Jerusalem Global Gateway of the University of Notre Dame, the series nurtures open discussion on theological and other topics relevant to the life of Jerusalem and the Holy Land.