Fr. Denis Blackledge, SJ, was a participant in the 2014 Three Month Continuing Education Program, on sabbatical from serving as priest at Corpus Christ parish, Bournemouth of the Catholic Church of England and Wales.  Little did he know that not long after he would be transferred to St. Francis Xavier parish of the archdiocese of Liverpool, he would become an advisor to the hit BBC series Broken, starring Sean Bean.

“It’s all about the Eucharist”: words spoken by Jimmy McGovern to me as we filmed the final scene of the six-hour epic BROKEN series he wrote for BBC1. I was privileged to be Religious Advisor to the series, which centred on the life of a parish priest in an urban setting in the north of England. Throughout the fourteen weeks of filming I mentored Sean Bean in his character of Fr Michael, Parish Priest of St Nick’s.

Before we began filming I took Sean and one of the directors aside to give them a “feel” for the priesthood. I told them what it felt like to me, after more than forty years of priestly ministry. I told them it started in the guts, went through the heart, that an individual dealt with his own “stuff”, then was fit to be alongside others in their crisis moments. Sean himself came to a Sunday family mass before we began filming.

Our church of St Francis Xavier was used as Sean’s parish church. For nine full twelve-hour days he was vested for mass, and much of the filming concentrated on the words of institution of the Eucharist. Jimmy was insistent that all be done with dedication to detail, so the new missal was open at the correct page of Eucharistic Prayer 3! 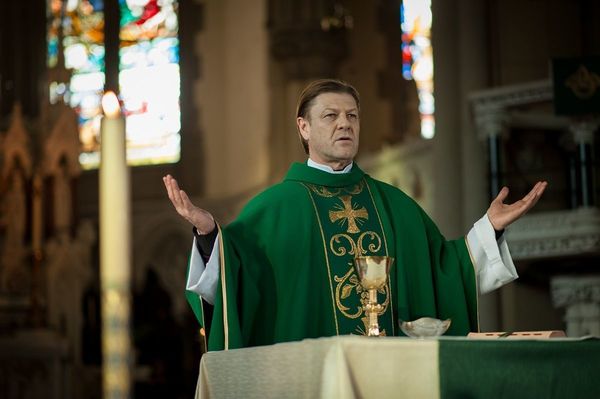 The humanity of Sean in character shone through, and there were aspects of his own history of brokenness that were highlighted. This made him open and vulnerable to the wonder and wounds of others in his parish, not least those who were going through times of great brokenness. It was as though he took the Eucharist out into the streets and homes of his parish, blending the words of sorrow and forgiveness at the start of the Eucharist, the words of consecration, and the moment of communion into the individual crises being experienced.

Jimmy McGovern doesn’t flinch from facing into heartbreak, and tears and tears were very much part of the series, as he took us into the lives and homes of individuals who were undergoing trauma of various kinds. Sean as Fr Michael had a superb gift of a listening ear and heart, and in character Sean visibly grew. I watched his humble and tentative approach into what for him was an awesome role. He was so easy to mentor, and it was a great privilege and delight for me to see how he tackled his role.

The down-to-earth reality and at times rawness of the series produced aspects of weeping both with sadness and with joy. For the first time in a long time the Catholic priest was shown in his truest and best light with great sensitivity by Jimmy McGovern.  So much so that afterwards in the multiple interviews I went through and the compliments I heard showered on Sean and the production team, I was amazed at the impact the series had on folk from all sorts of backgrounds.

During the fourteen weeks of filming I was on tap for questions and information, and great trust was shown. Not only did I occasionally correct bits of script, but they made sure I checked that all was as it should be not just at the altar and in church, but at bedside scenes, or at a burial, or a funeral, or even in the morgue and funeral home. Such was the delicacy with which the whole team of writer, directors, producer and back-up team worked to create as authentic a piece on modern Catholic priesthood as could be shown.

Perhaps the finest moment was when a retired Bishop wrote in to say that this series of BROKEN should be required viewing for all seminarians, priests and bishops!

Article © Father Denis Blackledge SJ. Photos of Broken © LA Productions.Post-script note: Sean Bean won best actor award at this year's BAFTA awards in London for his part as Father Michael in Broken, and the Broken series also won the top award from the Sandford St Martin Trust, which is a trust focused on excellence in religious broadcasting.   Some of the production team and cast found time on the final day on set at St. Francis parish to take a group photo.  From left to right: Broken Director Ashley Pearce, Fr. Denis Blackledge, SJ, Sean Bean, CEO of LA Productions Colin McKeown, and screenwriter Jimmy McGovern.