Last year, scholar and Professor Emerita of Eastern Mennonite University Dorothy Jean Weaver released her latest book, The Irony of Power.  26 years in the making, three essays within the book were written at Tantur during various sabbaticals from 1996 to 2010, the last sabbatical being the period of time in which Dorothy envisioned he book itself.  Here, New Testament scholar and journalist Reta Finger reviews The Irony of Power.

The Irony of Power: The Politics of God within Matthew’s Narrative 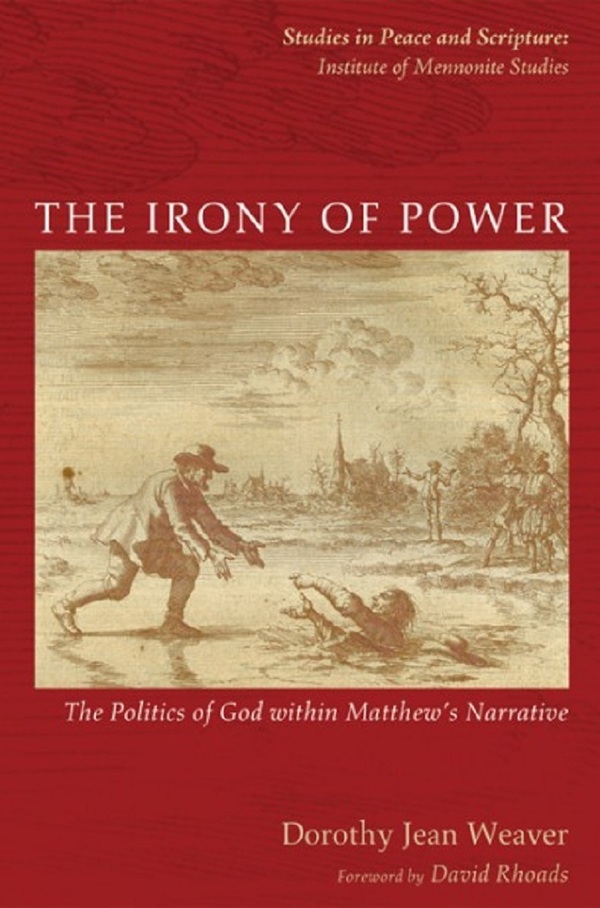 In her Prologue, Dorothy Jean Weaver describes herself with three “M’s”: Mennonite, Matthew, and Middle East. Without a doubt, this book features at least two of her passions—her lifelong exegetical studies of Matthew’s Gospel, and her deep involvement in the geography, history, theology, and politics of Israel-Palestine.

Since graduate school, Weaver has done intensive literary studies of Matthew. The twelve chapters of her book represent essays she has written over the years on the topic of how Matthew presents “the politics of God” in Jesus’s life in ancient Palestine. The irony, of course, is how power is subverted. The “little ones” of society are lifted up, while those with political power lose out. Through her extensive experience in the Middle East, Weaver is finely attuned to the subtleties of political power imbalances.

A major example of this, which frames Matthew’s account, concerns the failed power of King Herod at the beginning (2:1-21), and that of Pilate and the chief priests at the end (27:62-66). Tricked by the magi’s dream, Herod is unable to get rid of the infant “King of the Jews,” who escapes with his family to Egypt. After Jesus’s crucifixion, Pilate and the chief priests try unsuccessfully to keep him dead in his tomb.

Part I of The Irony of Power sets the stage by showing how the New Testament as a whole confronts “the Powers of this world.” Parts II and III deal only with Matthew—first “The View from the Top Down,” then “The View from the Bottom Up.”

Though I have also been aware of political irony in the Gospels, I am in awe of Weaver’s intense literary analysis that highlights every possible Greek word in the text to drive home her point. Especially challenging is her chapter on “Transforming Nonresistance: From Lex Talionis to ‘Do Not Resist the Evil One,” as she analyzes these “hard sayings” of Jesus in great detail. However, the following chapter places them in the “real-world” context of the occupied Palestinian Territories. Stories from Weaver’s long-time Christian Palestinian friends living in the midst of everyday insults and brutality put flesh on Jesus’s “hard sayings” that otherwise may seem impossible to live out.

Other chapters in Part III deal with various issues still very current today: living in a time of war, a “geo-theology” of “inheriting the earth,” and the role of women in Matthew. Though they lived in a patriarchal society, “God [was] at work in the lives of women in unanticipated and extraordinary ways” (p. 256).

Weaver’s well-written argument for “the irony of power” in the Gospel of Matthew seems unassailable, with no literary stone left unturned! True, lay readers may at times get lost in the thicket of text references demonstrating a particular point. But it’s a wonderful reference for teachers, preachers, and Bible study leaders as they communicate “the politics of God” both to today’s powerful leaders at the top—and encourage faithful “little people” who feel crushed by these powers.

Reta Halteman Finger taught New Testament at Messiah College in Grantham, Pennsylvania, until she retired. She is a contributing editor to Sojourners magazine and writes a Bible study blog at www.eewc.com.

The Irony of Power was published by Pickwick Publications, Eugene, Oregon, 2017. 322 pages long, it is available in print and digital form through online purchase.