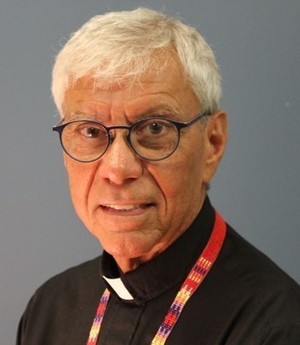 We are happy to announce that Fr. John Paul, S.J. has been named as the new Rector of Tantur Ecumenical Institute succeeding Fr. Russ McDougall, CSC.   He is no stranger to Tantur since he is an alumnus of the Six-Week Program in 2013; thus he returns to Tantur with a great knowledge and understanding of our mission.

“Fr. JP”, is a member of the Midwest Province of the Society of Jesus (Jesuits).  He was ordained in 1980 and has a Masters of Sacred Theology from the Jesuit School of Theology in Berkeley, California as well as a Masters of Fine Arts in Theatre from The Catholic University in Washington DC.  He has served as Director of Novices, Assistant Provincial, Director of Formation, and Provincial Assistant for Native Ministry in his years of internal governance within the Jesuits.  He also has ministered with Native peoples on the Pine Ridge Indian Reservation in South Dakota working as teacher, superior, president, and superintendent of schools at Red Cloud Indian School.  Prior to coming to Tantur, he was at Cristo Rey Jesuit High School in Minneapolis, Minnesota as Director of Jesuit Mission and Identity.  Another asset that he brings to Tantur is the fact that he is “tri” ritual—having Melkite, Roman, and Maronite faculties.

Fr. JP is eager to build upon the Tantur Ecumenical Institute’s firm foundation and to expand on the Institute’s ministry of encounter.