Born in Canada in 1956, Brother Emile joined the Tazie Community in France in 1976.  As a member of Taize Community, he regularly teaches theology classes and leads workshops, bible studies and retreats at the community in France and across the world.   He has written on the otherness of God, Vatican II, the Eucharist and Early Christians,  He is actively involved in the initiative "Taize Pilgrimage of Trust Across the Earth," which has been conducted in Europe, South Africa, the United States, and soon to the the Middle East.  His most recent book, "Faithful to the Future, Listening to Yves Congar" was published by T&T Clark in 2013.

Since 2017, Brother Emile has been actively working with Tantur Ecumenical Institute in an effort to cultivate a strengthened culture of ecumenical community prayer and worship at Tantur.   "When the Tantur Ecumenical Institute invited the community of Taize to come to Tantur, we felt it was important to try to respond, even if the weekly meetings of young adults at Taize require us to be in France for most of the year.  We share with Tantur a common ecumenical vocation.  And I believe share also the conviction that ecumenism is not a "specialty."  The Church cannot be itself if it is not ecumenical. And we do not seek the visible unity of Christians in order to be stronger "against" others, but in order to be a leaven of trust and of reconciliation in the human family.  I personally very much appreciate the spirit in which the Rector, Fr. Russ McDougall, and the Director of Programs, Frederic Masson, are seeking to develop the rich potential that one senses at Tantur." 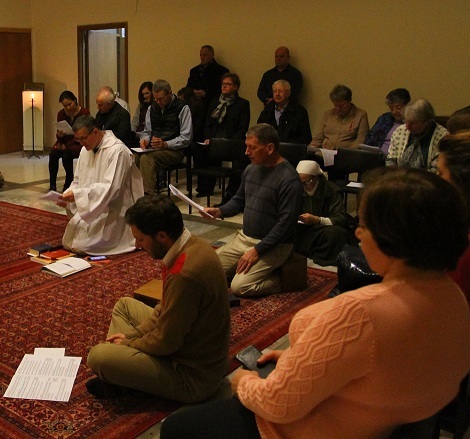 With regards to Tantur as a Christian community engaged in worship and prayer, Brother Emile has much to say. " When we were asked to help with the prayer life of the Institute, we were hoping that prayer, as it is practised at Tantur, would correspond to a hunger and a thirst among those taking part in the program.  And I have noticed this this has been very much the case.  The prayer that we have been having every day for the past month is not complicated. It's a moment to rest in God, to be renewed from within. We sing, we listen to the Word, we are silent. Being here reminded me of what the Superior of a religious order once told me. I was invited to give a retreat to the priests who had been ordained in that order in the last ten years.  The Superior told me why thought the retreat was important: "When we are young, even if we may know theoretically that it is God who sustains us in our ministry, we nevertheless tend to to think that ultimately what is being done is happening because of me.  He added: "It's impossible to persevere if we maintain that illusion.  We run out of steam. That's when we need to realize that our strength comes from God." Maybe the generalization is a little exaggerated, but I believe there is a lot of wisdom in those words, and I think those on sabbatical at Tantur who are searching for that strength and trust are also nourished by prayer."

Brother Emile has recently completed a third stay at Tantur during the autumn of 2018, where he led regular Taize Sunday prayers as well as working with Institute staff and others in Jerusalem to further strengthen Taize's presence and work in the Holy Land.  A highlight of the experience was a young adult Taize retreat, held in early October at Tantur.  As Taize's 2018 theme was "Inexhaustible Joy," taken from the message of "Four Proposals of Joy" by Taize Prior Alois.  Attended by Jerusalem Global Gateway students, Tantur Continuing Education Program participants, the Holy Land network of JEC (Jeunesse Etudiante Catholique), led by Fr. Bashar Falouweh of the Latin Patriarchate as well as other local Christians, the retreat  and its theme was well-received by its participants.  A special focus was put on an openness to prayer, as well as reflections on topics such as thinking of those in unfavorable positions as described in the The Beatitudes in the Gospel of Luke, and a special workshop on interfaith concerns.   Fr. Emile offered further reflection following the conclusion of the retreat: "Tantur serves as a bridge between Jerusalem and Bethlehem.  When I am here at Tantur and I am praying in the morning, the first two things that I see in the morning are the Church of the Nativity and the Wall.  If we can share the beauty of Tantur; if every night could be a night of Christmas, if we can take up that theme of joy....with Taize in the Holy Land, now is the time to go deeper; to listen to the cry of the most vulnerable,"

1n 2019, Tantur and Brother Emile will continue to be involved in developing the Taize presence in the Middle East, in particular through an ecumenical pilgrimage to Lebanon, which has been titled the "Taize Pilgrimage of Trust."  This ecumenical initiative has the support of all major Christian communities in Lebanon as well as the Middle East Council of Churches,  will involve Middle Eastern Christians from across the region, in particular from Iraq, Syria, the Holy Land and Jordan.  Local efforts in the Holy Land will include strengthening the Taize presence in the Christian communities along the Northern Coast. And as always, Taize in Jerusalem will strive to bring together both the local and international Christian presence, and continue to build an prayer community with opportunities for its participants to engage in services and retreats with an emphasis on prayer, personal reflection and inner silence.

"We will keep digging towards a deeper level of theology, community, joy and hope. Can we truly learn to pray? This is a question that we are also searching for an answer to,"  Brother Emile reflects.   Perhaps the answer will reveal itself in the coming year.

To read more about Taize, visit the community website. For more information on Taize prayer at Tantur and elsewhere in the Holy Land, please contact tantur@tantur.org.