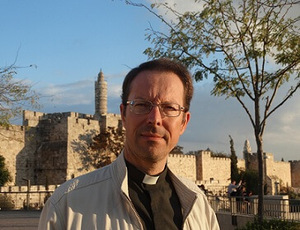 The Sunday after Epiphany is associated with the baptism of Jesus by John in the western Christian calendar, as reflected in the Revised Common Lectionary. The baptism of Jesus is also one of the emphases of the feast of Epiphany in the Orthodox churches. More or less elaborate and dramatic liturgies and extra-liturgical customs have evolved to mark the feast, many of them originating in the act of Christians’ renewing their own baptismal promises. Important as the Christian traditions are, it is perhaps worth reflecting on the baptism of Jesus within the Judaism of its day.

According to Luke’s gospel, John the Baptist was the son of Zechariah the priest. As priesthood in Judaism is hereditary, this would imply that John himself was a priest. While none of our other sources confirm this information, it is nonetheless worth considering the significance of this. Like Jeremiah the prophet centuries earlier, John is a priest whose ministry is not his inherited role of service in the sacrificial cult of the temple in Jerusalem. Whereas Jeremiah proclaimed the destruction of the temple and called the nation to repentance, John called Israel to repentance offered, not a sacrifice in the temple but a baptism in water, which symbolised their repentance and forgiveness, in anticipation of God’s decisive intervention in human history.

The Jordan river in which John baptises, is that parted by Joshua when he led Israel to its often genocidal conquest of Canaan, according to the deuteronomistic narrative. The prophet Elijah similarly parted the waters when crossing in the opposite direction with Elisha, before his ascension to heaven in the chariot of fire, and Elisha did so again on his return to Samaria. It was in the waters of the Jordan that the gentile Naaman was cleansed of his leprosy, when he washed himself – ebaptisato in the Greek text - at Elisha’s direction. The waters of the Jordan symbolise not merely the beginning of God’s renewal of Israel for those who responded to John’s call and prepare themselves to participate in it; these waters are also the means whereby the outsider, the enemy, who accepts God’s healing power is brought to wholeness.

In coming to John for baptism, Jesus identifies with the sinful state of Israel. He does not protest, or seek to maintain, his own innocence and purity. He does not dissociate himself from sinful Israel, but identifies himself fully with the people to whom he offers a new vision of God’s kingdom, and whom he invites to be a part of it. He invites also the marginalised, the outsider, the foreigner, to enter the waters of baptism, to experience death, resurrection, and rebirth. So the Church rightly associates Jesus’ baptism by John in the Jordan with his manifestation to the world, and its mission to all nations.

Rev. Canon Dr. Nicholas Taylor was a resident scholar on an independent sabbatical in 2015.  He is the author of Paul on Baptism: Theology, Mission and Ministry in Context.