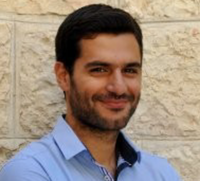 Georgios Tsourous is a social anthropologist and an Associate Fellow at the Centre of Ethnographic Studies in the University of Kent in the UK. His research, funded by the British Academy, involves the investigation of the sociocultural relationships between the different Christian communities of Jerusalem, focusing upon the Greek (called Rum) Orthodox community. Through conducting long-term ethnographic work in Jerusalem’s Old City, Georgios explored the relationships that are forged between resident clergy as well as between local Christians within the context of everyday life in a major shrine of Christianity, the Church of the Holy Sepulchre. His research interests also include Christian-Muslim relations and the impact of pilgrimage in shared sacred spaces in Israel/Palestine and Egypt.