A major component of the academic and social life of Tantur is the many public lectures and symposiums which occur throughout the year.  Here, we list a few of the recent speakers and lecturers that have shared their wealth of knowledge with our community. 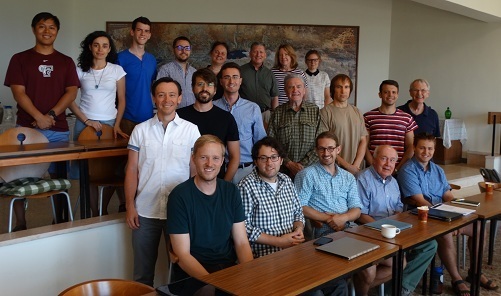 The 2018 Tantur Summer Seminar included fifteen graduate students, from a variety of universities in Europe and North America, and ten faculty members from Notre Dame, Yeshiva (New York), Rostock (Germany), and Jerusalem.  The program, as in the previous year, was centered on daily discussions of selected texts concerned with the theme of “salvation history”:  the way Jewish and Christian believers and thinkers have, through the ages, have understood God’s work of salvation not simply as an individual encounter between God and the believer, but as a process realized in historical events, involving historical people in historical places, which is still moving towards its conclusion and fulfillment.

The concept of salvation history (Heilsgeschichte; histoire du salut) was especially promoted in the 1940s and 50s by Oscar Cullmann, a Lutheran New Testament scholar from Strasbourg, who taught for many years at the University of Basel and at the Sorbonne.  Offering the notion as an alternative to historically sceptical approaches to the Bible - especially to the existentialist, wholly interior understanding of salvation popularized by Rudolf Bultmann and his students - Cullmann found perhaps his warmest welcome among Catholic theologians, and his approach is echoed in a number of the documents of Vatican II, at which he was an enthusiastic observer.  During the Council, in fact, Cullmann became a good friend of Pope Paul VI, and persuaded the Pope that this idea of salvation history, especially when considered by Christians of all the Churches near the sites of original events of the Biblical narrative, was the most promising basis on which to build ecumenical contact and dialogue among the Churches.  This led the Pope to request Fr. Theodore Hesburgh’s help in redeveloping a then-unused Vatican property, on the “hill of Tantur” overlooking Bethlehem, into the institution that was officially named, from the start, the “Tantur Ecumenical Center for the Study of Salvation History.”  Our summer seminars are part of Notre Dame’s present effort to reclaim Tantur’s original identity.

This past summer, we chose to focus our discussions on the meaning and relevance of the notion of salvation history, not simply in the Christian tradition but also in that of Judaism and Islam.  In addition to Christian participants from many Churches and traditions, Jewish theologians and graduate students were a vital part of our daily discussions, and a Lutheran scholar from Germany who studies Islam – Prof. Jutta Sperber – helped us reflect on how the notion could also be seen as basic to the Muslim conception of God’s saving work.  Evaluations from participants, submitted after the seminar was over, universally expressed strong satisfaction with this two-week experience of learning, praying, and sightseeing together at Tantur. 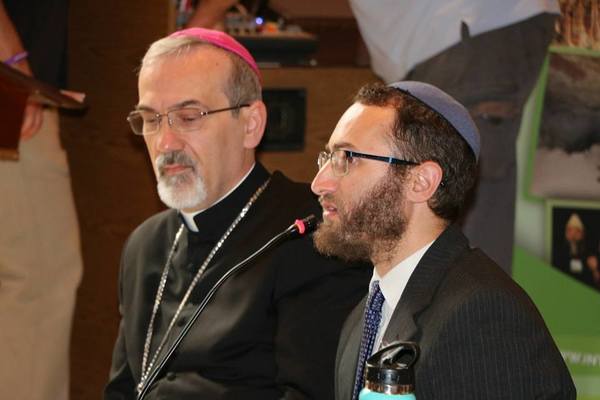 Held at Tantur Ecumenical Institute on May 9th, 2018.

The Interfaith Climate Change & Renewable Energy Conference was co-organized by the Interfaith Center for Sustainable Development, the Arava Institute for Environmental Studies, the Swedish Theological Institute, and the Tanture Ecumenical Institute, with a focus on urging and empowering faith communities to curb climate change and promote renewable energy use. Religious leaders spoke about religious imperitives for promoting environmentally sustainable practicies and the use of renewable energy. Presentations by leading scientists described the current impacts and imminent dangers of climate change to the region, while breakout workshops and an ecological walking tour enabled person to person interactions. 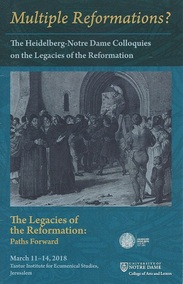 The year 2017 was one marker of the 500th anniversary of the beginning of the Reformation. The internal complexity of this historical and theological process, along with its relationships to reform movements in Catholicism, raise fascinating questions that are crucial to understanding our world today in all its dimensions. This colloquia, cosponsored by one of the largest faculties of Catholic theology and one of the largest Protestant faculties in the world, gathered the most recent scholarly advances in our understanding of the Reformation in order to assess its legacies and identify fruitful avenues for continued ecumenical scholarship and dialogue. 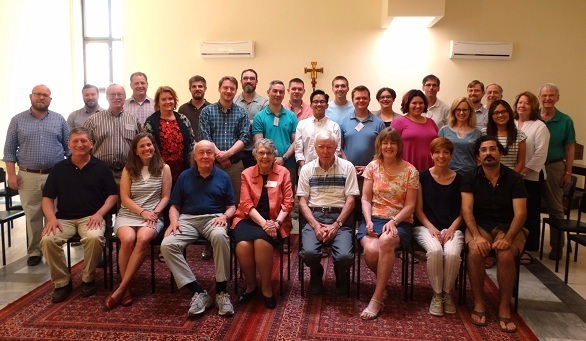 Tantur Summer Seminar coordination between Tantur Ecumenical Institute and the Department of Theology of the University of Notre Dame, held July 3rd - 15th, 2017

Communion Among Christians: The Early Church Today brought together both emerging and established scholars from Catholic, Orthodox and Protestant traditions to share academic papers, encourage discourse and fellowship in the field of research of common Christian theology and heritage.

The seminar took the idea of “Communio” as its theme, exploring how different Christian traditions can enter into full communion with one another.  The word “Communio” comes from Latin, meaning “sharing in common.”  The seminar invited scholars to share their own research about the ideas of Christian communion and discuss these important concepts.  It began by looking at the historical idea of Communio and what the members of the early Church had written about their Christian community.  The seminar looked at readings from Augustine, Irenaeus and Cyprian.  Participants also looked at more contemporary understandings of Christian communion by discussing the writings of modern theologians and Christian churches.

21 students participated from 14 different institutions and 4 countries.  Seminar participants volunteered to co-present the readings on different days and engaged in rigorous discussion about the material.  Faculty presenters from 9 different colleges and universities led the discussions and participated alongside the graduate students.  There were additional site visits to holy sites near Jerusalem and weekend outings to the surrounding region.  The seminar served as a great way to put scholars in touch with one another and to ask important pressing questions. 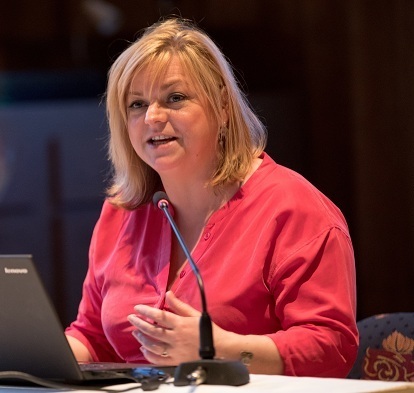 From Traveller's Tales to Triangulation: The Early Exploration of the Holy Land by the Palestine Exploration Fund

Lecture held at Tantur Ecumenical Institute as part of a joint lecture series with the University of Notre Dame Jerusalem Global Gateway and the WF Albright Institute, May 2nd, 2017

For over a century and a half, the Palestine Exploration Fund has been a critical component of the advancement of archeological research, cartography and cultural anthropological studies in the Levant, working alongside many Christian institutions and brotherhoods engaged in the quest for greater knowledge of the land so central to the understanding of the Abrahamic faiths.  In her lecture, PEF Executive Secretary Felicity Cobbing presented highlights of the origins of the Fund's work in the Holy Land, including an examination of some of the factors within 19th century British society which gave impetus to its work. 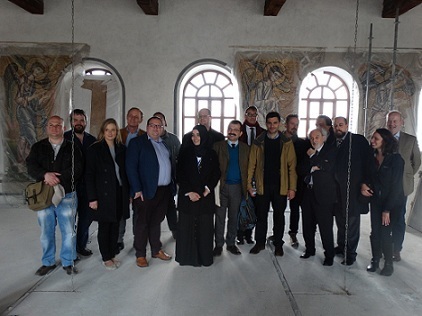 To conclude the Sacred Places and Cultural Heritage Conference co-organized by several institutions, including the Oxford Journal of Law & Religion and the Jerusalem Global Gateway of the University of Notre Dame, Prof. Anthony O’Mahoney, Director of the Centre for Eastern Christianity at University of London, and Merav Mack, Research Fellow at the Hebrew University Institute for the Advancement of Peace, co-hosted the final session of the conference with the theme of Legal Protection of Sacred Places - Lessons from History. 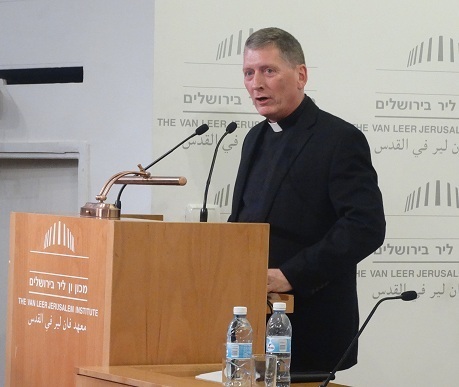 The Future of Interreligious Dialogue in Israel

On the Occasion of the 50th Anniversary of "Nostra Aetate"

The year 2015 marked the 50th Anniversary of Nostra Aetate (In Our Time), also known as The Declaration of the Church on the Relation with Non-Christian Religions of the Second Vatican Council. Concluded by Pope Paul VI, a critical figure in the founding of Tantur Ecumenical Institute, Nostre Aetate was a watershed moment for interfaith relations in the Holy Land. At this conference, co-organized by Tantur Ecumencial Institute, the Interreligious Coordinating Council in Israel and its parent organization of Rabbis for Human Rights, and Sisters for Sion religious community, the conference looked at the present and future of interreligious relations, dialogue and activity in the Holy Land. 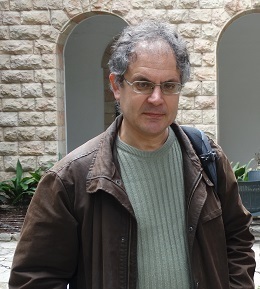 War and Pacifism in Eastern Orthodoxy: Historical and Contemporary Stances and Trajectories

Dr. Yuri Stoyanov, Department of Near and Middle East in the School of Oriental and African Studies (SOAS) in the University of London

The provenance and nature of the principal stances to war, violence and pacifism in Eastern Orthodoxy and their historical trajectories and modern developments present both important analogies and dissimilarities to the respective Catholic and Protestant attitudes and their evolution. Yet these Eastern Orthodox stances and their influential articulations in religious thought, philosophy, literature and iconography have received much less detailed and in-depth treatment than their Western Christian counterparts. Drawing on the lecturer’s ongoing work on translation of and commentaries on medieval and modern primary sources related to the history and nature of war ideologies and pacifism in Eastern Orthodox cultures, the lecture will chart the principal stages and patterns of these Eastern Orthodox perspectives on warfare and pacific responses to military conflict and collective violence. Richly illustrated with textual and iconographic material, the lecture will present the provenance of the historical trajectories of these stances in their early and influential formulation in patristic literature (based on the scriptural exegesis) and the conceptualization of a Christian just war tradition in the early Eastern Roman/Byzantine empire and their medieval developments in secular and ecclesiastical debates on the status of the Orthodox Christian soldier and the formation of specific Orthodox religio-military lay ideologies. The paper will also focus on modern and current re-assertions (in a classical or updated versions) of the enduring currents of pacifism (including also the lay pacifism of the passion-bearer prince-martyrs, Saints Boris and Gleb) and non-resistance to violence as well as the traditions of just and justifiable war and in authoritative pronouncements and documents issued by modern Eastern Orthodox churches. The paper will demonstrate that further investigation and publication of the sources on medieval and modern Eastern Orthodox traditions on war and pacifism are of increasing relevance and importance and that some of these traditions have been undeservedly neglected to the detriment of the better understanding of the diversity of Christian attitudes to organized and collective violence and peace-making. A better understanding of these Eastern Orthodox perspectives will not only enrich our knowledge of the historical transformation of the Abrahamic/monotheistic traditions’ stances towards war and peace on the whole but will have contemporary relevance in the quest for current religious and ecumenical answers to some vital problems in the ethics of war, inter-religious violence, religious peace-making and some of the current critical dilemmas facing Middle Eastern Christianity. 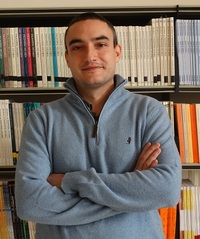 If the pontificate of Paul VI passes through different phases—Antonio Acerbi has proposed a division into three periods of five years each:  reforms (1963-1968), crisis (1968-1973), denouement (1973-1978)—the same might be said with respect to the developments that the ecumenical question underwent during this same arc of time.  In this sense, it is possible to identify an initial period of “ecumenical euphoria,” already perceptible in the final years of Montini’s tenure in Milan, that refers to the years of the Council and the period immediately following.  There followed, intertwined with the events of 1968, a period of crisis.  On the one side, an underwhelming bilateral dialogue—conducted on the Catholic side by a Secretariat in process of institutionalization—produced the first bilateral accords between the churches.  On the other, these came under attack from those who wished to see more immediate results, such as the entrance of the Catholic Church into the World Council of Churches (which Paul VI declared in Geneva in 1969 to be “not…so mature that a positive answer could or should be given”), or the possibility of achieving intercommunion.  In the end, Montini’s last years were marked by a confessional reaction in which some sectors of the old Conciliar minority set their sights on the repudiation of the provisions of Vatican II, going back to the hard line of a mentality and practice according to which “only the Catholic Church possesses the truth.” 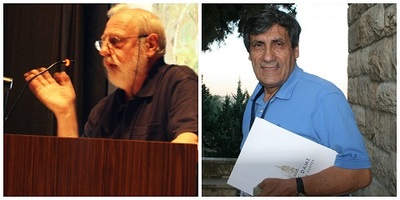