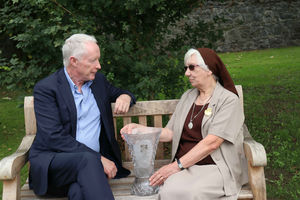 Sister Bridget Tighe, FMDM, a former Vice Rector of Tantur, has been awarded the inaugural Trocaire Romero International Award, in recognition of her many years of work in Gaza and the Middle East.  In a ceremony held on August 18th held at the Franciscan Convent Chapel in Ballinasloe, County Galway, Ireland.

"The honour highlights efforts to raise awareness of human rights violations and support for people who are experiencing poverty and injustice.  Around the world Trócaire works with over 400 local organisations, which work tirelessly, and often at great personal risk, to support communities facing threats. The Trócaire Romero International Award recognises the outstanding work carried out by one of these partner organisations." as quoted in an article highlighting the ceremony published on Trocaire's website.

Sister Bridget continues to be a supporter of and regular visitor to Tantur, where the community and staff, both past and present, join in the chorus of congratulations for this recognition of service.

For more information on the award and the work of Sister Bridget, visit the website of the Franciscan Missionaries of Divine Motherhood, and view this brief introductary video.